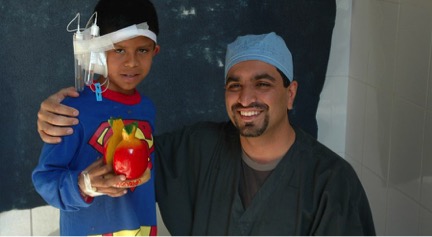 “I never want to forget where I came from.”

Where Dr. Ritvik Mehta came from is Kenya, the landscape for most of his childhood.

He has fond memories of the country, including the friendships forged there. He also remembers seeing, from as soon as he could form memories, examples of widespread poverty and hunger.

Each year from elementary school until the start of high school, he participated in a walk against hunger. The campaign involved raising money from family members and other sponsors for charity. Then on event day, he would cover more than 15.5 miles.

“Early on, I learned the significance of giving back,” Mehta said. “That has been a big motivation for me all of these years.”

When he reached 10th grade, his family moved to Los Angeles to reunite with relatives and allow him to pursue broader educational options. Mehta recognized his strengths in science and connecting with other people, and those interests guided him to medicine.

The career choice enabled him to follow the giving-back creed.

During his post-medical school residency in Boston, Mehta went on his first charitable health trip. Helping the impoverished in Ecuador through the nonprofit organization Medical Missions for Children resonated with him deeply.

“It was an incredible reminder of my years in Kenya. I felt right at home, and I knew I would press on with using my skills to bring physical and emotional healing,” he said.
Mehta has gone on at least one overseas medical mission every year since that inaugural journey in 2005. That includes visiting Guatemala for the past eight years.

At his Scripps Health-affiliated practice in Carlsbad and La Jolla as well as during his international surgical trips, Mehta focuses on his specialty of otolaryngology — dealing with diseases of the ear, nose, sinus, mouth, throat and voice, along with structural problems of the face and neck.

A mission lasts eight to 14 days for a team that comprises surgeons, anesthesiologists, nurses and other support staff from numerous countries. They raise funds and pay out of pocket for all expenses, including the medical equipment.

After doing final screenings on preselected patients, Mehta performs surgeries from 7 a.m. to 6 p.m. each day. The trip ends with the Medical Missions for Children team discussing post-operative care with its local partners.

“It’s a jam-packed schedule, but there’s none of the red tape that we have in the U.S. It’s so refreshing to not have the bureaucracy,” Mehta said. “I also find it rewarding to exchange ideas with colleagues from around the world.”

In Guatemala, his subspecialty has been doing surgeries for children with microtia, a congenital deformity in which the outer ear is missing or under-developed. He said high-altitude countries in Latin America have a higher incidence of this condition.

Forming an outer ear is a process that takes multiple surgeries over years. Mehta has gotten to know his young patients and their parents well. He said they remember to ask about his two daughters each year, and they bring handmade toys, paintings, food and other small gifts for him and his family in Solana Beach.

“The main thing I learn from these families is how they’re so thankful for what they have. They’re always smiling,” he said. “I don’t know how they live with so little, yet are some of the most content people I’ve met. We need to learn from them about what matters most in life.”

At 39 and well-established in his career, Mehta has a simple wish: to keep advancing research in his field and to keep giving back.

“I’m just really humbled for the opportunities to help children have a brighter future.”